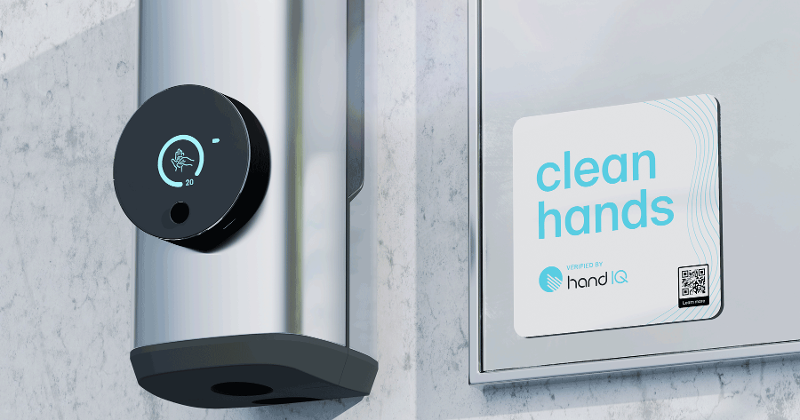 In this installment, RB looks at a device designed to encourage hand-washing.

The technology:Hand IQ makes what it calls a “smart hand-washing assistant” that both reminds employees to wash their hands and guides them through the process. The devices also collect data so employers can monitor compliance.

The technology was developed in 2017 and initially tested in hospitals before hitting the restaurant market this year, as the pandemic has put a premium on safety and hygiene in restaurants.

The Los Angeles-based company is piloting its product with Del Taco and Kitchen United and has had conversations with McDonald’s, Focus Brands, Inspire Brands and others, said CEO Sean Podvent.

“We have more interest in pilots than we do devices right now,” he said. “It’s a good problem to have, but it is a little bit of a problem.”

How it works: Each of the small circular devices attaches to a soap or sanitizer dispenser and uses bluetooth technology to interact with buttons worn by employees. If an employee passes a dispenser and hasn’t washed their hands for a predetermined period of time, they’ll get a buzz reminding them to do so.

An LED screen on the device displays encouraging messages and a countdown of 20 seconds as they wash their hands.

The device collects data on both group and individual compliance (either by name or anonymously) that the employer can view in a dashboard.

Early next year, the company plans to release a new version of Hand IQ that has a full screen, which will display the timer as well as instructions for how to wash properly. The full screen could also allow for gamification via a leaderboard or other elements, Podvent said.

Benefits: The device has shown an ability to improve hand-washing compliance. In a hospital test, compliance increased from 82% to 99.8% after Hand IQ was installed, Podvent said.

By automatically reminding individual employees to wash their hands, the device also relieves managers from having to do that themselves. And the data feature allows employers to keep tabs on hand-washing and take action if there are issues.

The devices, though intended for staff only, can also be a sign to customers that a restaurant is taking hygiene seriously.

Drawbacks: Hand IQ can remind employees to wash their hands, but it has no way of ensuring that they’re doing it effectively.

“It’s not possible for us to 100% make sure that somebody has washed their hands perfectly,” Podvent said. “The point is about reminding you, making sure you get soap on your hands and making sure you’re participating in 20 seconds of hand hygiene.”

KU has taken a proactive approach to hygiene and sanitization throughout the pandemic, and Hand IQ is an extension of that, said Larrah Pawlak, KU’s VP of operations.

“Ironically, they’re not buzzing very often because we have a much more rigid, proactive approach to teams washing their hands and sanitizing,” she said.

For now, only Kitchen United employees wear Hand IQ buttons. But the idea is to provide a sense of safety and trust for everyone in the facility, from restaurant partners to delivery drivers and customers, Pawlak said.

KU has yet to start using Hand IQ’s data processing feature, but Pawlak said the company is open to expanding the pilot once it’s seen everything Hand IQ can do.

RB’s take: Anything that helps improve hygiene in restaurants is going to be big for both employee health and consumer perception for the foreseeable future. Hand IQ appears to be an effective and affordable way to do that. Could the regular reminders get annoying? Maybe, but it’s probably worth it in exchange for better hygiene.