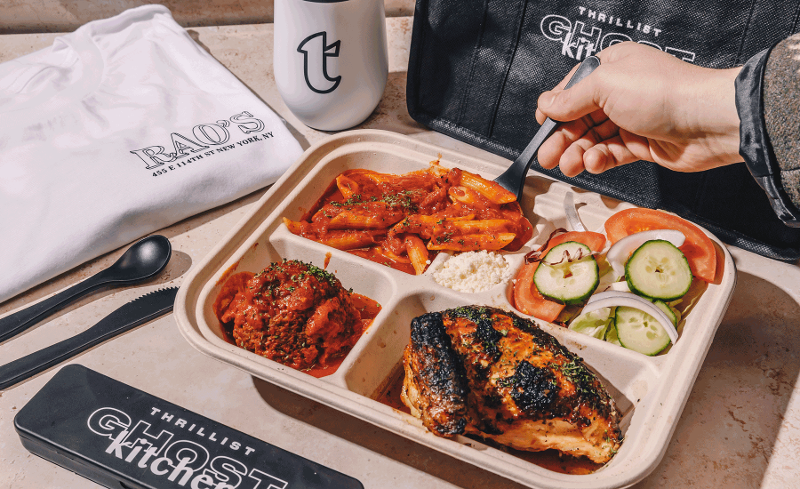 Photograph by Cole Saladino for Thrillist

Welcome to this week’s tech roundup, a quick look at the latest restaurant technology news. Developments include a new spin on the ghost kitchen, a grant program for delivery drivers and a potential new IPO entrant.

Starting Dec. 9, Thrillist will host a rotating group of restaurants out of Zuul’s Soho facility. Each of the 10 restaurants will get a two-week residency, offering limited-edition meals for delivery only. Thrillist, which is renting the space from Zuul, will cover all costs including food, labor and delivery.

Orders will include a T-shirt designed by a local artist, a reusable insulated bag, a cutlery set and a wine tumbler.

The partnership hints at the evolving thinking around ghost kitchens and how they can be used. As my colleague Jonathan Maze pointed out in a recent blog, there’s lots of interest in ghost kitchens outside of the restaurant world, including from hotels, grocery stores and now, apparently, news outlets.

In this case, Thrillist gets exposure, indie restaurants generate revenue in tough times, and Zuul gets a tenant.

The third-party delivery company is offering $10,000 grants for drivers who are making an impact on their communities outside of work.

Grants will be awarded to 20 drivers and can be put toward education, civic engagement and philanthropy efforts.

“Our drivers play a valuable role to serve restaurants and diners across the country, and we’re proud that our grant program is a way to further their personal and professional development and help them drive more change in their communities,” said Grubhub COO Eric Ferguson in a statement.

Applicants must submit a video or essay about their community efforts, how Grubhub relates to their mission and how they would use the grant. The application period runs through Jan. 4, and grants will be awarded in the first quarter of 2021, with another round planned for spring.

POS provider Toast nearly doubled its valuation with a secondary sale of its shares and could be considering an initial public offering, CNBC reported last week.

The company allowed current and former employees to sell vested shares for $75 each, CNBC said, citing people familiar with the matter, bringing the company’s valuation to $8 billion.

“To support our employees and former employees as they navigate the impact of COVID-19, we did complete a secondary offering recently,” Toast confirmed in an email to Restaurant Business. “As is customary, we can’t comment on the participating investors or the implied valuation.”

It represents a reversal of fortunes for Toast, which laid off about half its staff as it struggled early in the pandemic. But with dining rooms closed, consumers began shifting to digital channels and restaurants quickly upgraded their tech capabilities, which may have benefited Toast.

CNBC, again citing familiar parties, said a Toast IPO could be in store for next year.

People wanting to order from Corner Bakery can now just Google it. The bakery-cafe chain became the latest to take advantage of Google’s ordering integration, which puts the “Order” button front and center when someone calls up the chain on the search engine or Google Maps.

Orders are routed to Corner Bakery via online ordering platform Olo, and customers can pay using Google Pay, creating a more seamless transaction for both parties.

Google presents an intriguing channel for restaurants, particularly as a way to capture new digital customers. The number of food orders placed via Google was up 15x compared to pre-pandemic, said Marty Hahnfeld, Olo’s chief customer officer, during an August webinar.

“The reason for that, we believe, is that these are first-time digital consumers that don’t have experience ordering from that brand, nor do they have a lot of preference to order from a third-party first. ... They’re seeing an ‘Order now’ button and they’re hitting it,” he said.

DoorDash has added a $2 fee for restaurant customers in Denver in response to the city’s cap on third-party delivery fees, BusinessDen reported last week.

Denver’s City Council in October approved a 15% cap on delivery commissions charged to restaurants by delivery providers. The caps, now in place in dozens of cities and counties, are intended to help restaurants struggling during the pandemic. While restaurants have widely celebrated them, delivery companies have warned that they would have to pass the charges to the consumer. That appears to be what’s happening in Denver.

Online ordering platform Allset has added a new feature that allows customers to filter nearby restaurants based on dietary and allergy preferences along with cuisine.

Customers can enter things like “vegetarian” or “gluten-free,” and Allset will add options fitting that description to a designated feed within the app. Customers can also add a note to the restaurant with allergy information or other instructions when they order.

"We're excited to introduce a first-of-its-kind personalized experience for our users built around their specific dietary needs and food preferences, as part of our mission to make everyday dining more efficient," said Anna Polishchuk, Allset’s chief product officer, in a statement.

Allset, which raised $8.35 million in funding in March, is a consumer-facing app focused primarily on takeout and contactless ordering.