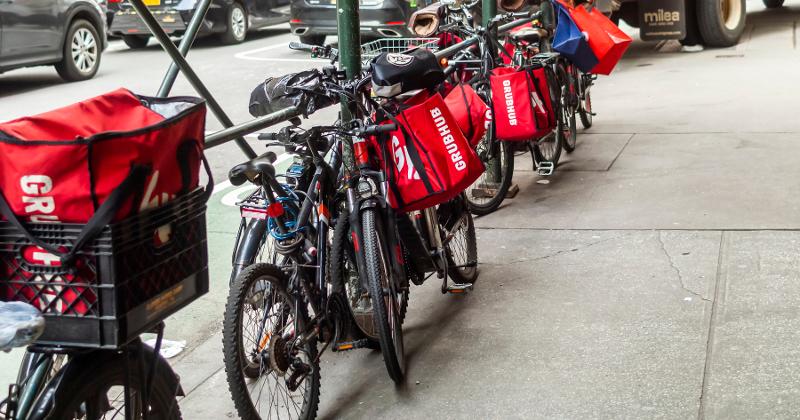 New York City is a key market for third-party delivery companies, but it has also worked hard to regulate them. / Photograph: Shutterstock

Couriers for DoorDash, Uber Eats and other delivery services in New York City would start earning $23.82 an hour in 2025 under a new proposal by the city’s Department of Consumer and Worker Protection.

That would be a significant raise from the workers’ current average hourly wage of $7.09 before tips, according to the city. It’s intended to level the playing field between contracted couriers and regular minimum-wage earners.

It would be one of the only laws of its kind in the U.S. and represents the latest challenge to the third-party delivery business model.

Third-party couriers are classified as independent contractors and therefore not paid a minimum wage. They’re also not entitled to other benefits such as expense reimbursement and health insurance.

New York’s proposal would seek to help its roughly 60,000 app-based delivery workers cover those costs by guaranteeing them a $19.86 hourly base rate, plus $2.26 for expenses like gas or repairs and $1.70 to make up for the absence of workers’ compensation.

The city noted that delivery workers are injured at a higher rate than any other industry. It has recorded 33 delivery worker deaths since 2020 and said that 29% of couriers that use bikes or mopeds have been seriously injured on the job.

Pay will be calculated based on a worker’s time spent waiting for orders as well as actively delivering them.

Couriers currently earn a per-order base rate that depends on the time and distance of each order. They can earn extra from tip and in-app promotions.

The only thing standing between the proposal and its implementation—for now—is a public hearing on Dec. 16.

It would make New York one of the only places in the country where third-party delivery drivers are guaranteed a certain wage. Seattle in June approved a $17.27 hourly minimum that will take effect next year.

“Delivery workers have delivered for New York time and again, including during the COVID-19 pandemic — now it’s time for New York to deliver for them,” said New York City Mayor Eric Adams in a statement. “This new proposed minimum pay rate would help ensure a fairer pay for delivery workers for third-party apps, providing more stability for 60,000 workers across our city. We look forward to hearing public comment on the new proposed rules as we prepare to implement the law.”

It’s the latest regulatory attack on third-party delivery services, which depend on a network of contractors to deliver orders placed on their platforms. The arrangement helps them keep costs down, and the companies have argued that changing it would force them to raise prices and cut services.

A group representing the companies had not responded to a request for comment by publication time.

New York is a key market for delivery providers, but it has also been one of the most aggressive in clamping down on them. It is already involved in at least two lawsuits with the companies over its efforts to permanently limit the fees they charge restaurants and force them to share more data with restaurants.

Chicago, San Francisco and Portland, Me., have also sought to put stricter regulations on the companies. The U.S. Department of Labor raised yet another threat last month with a proposed rule that would make it easier to classify independent contractors as employees.