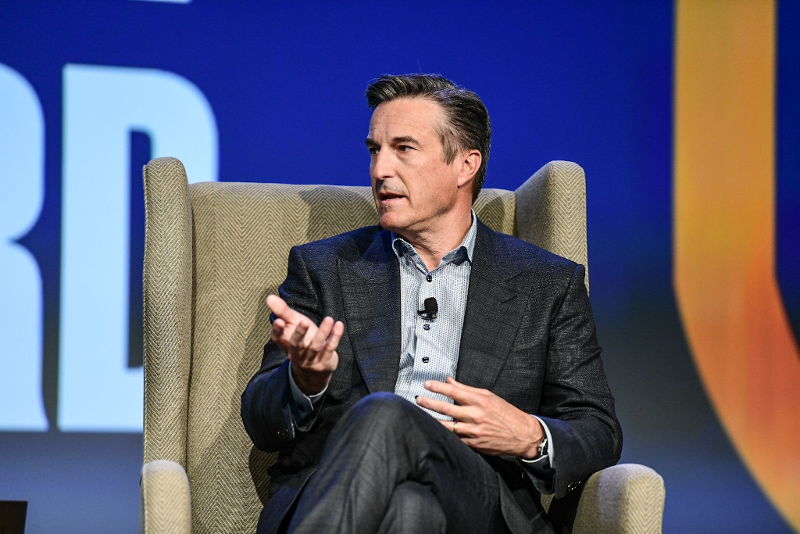 Anyone hoping for an Inspire Brands IPO—or acquisition—would be advised not to hold their breath.

Paul Brown, CEO of the owner of Arby's, Sonic and Dunkin', tempered expectations of another immediate acquisition while speaking at the Restaurant Leadership Conference Monday. He similarly dismissed the possibility of a potential initial public offering, though he didn't exactly dismiss either possibility outright.

When asked by Restaurant Business Editor-at-Large Peter Romeo whether Inspire would make another acquisition to follow its most recent deal, its $11.5 billion acquisition of Dunkin’ Brands in 2020, Brown said, “We’re very happy with what we have now.”

When asked whether the company would go public, he similarly demurred. “We’re very happy with our capital structure,” Brown said.

Inspire Brands was created with the 2018 acquisition of Buffalo Wild Wings by Arby’s, owned by the private-equity group Roark Capital. It was an unusual deal at the time mostly because of their service models—Arby’s is a fast-food restaurant, Buffalo Wild Wings casual dining.

The company has since gone on to acquire several other large chains, including the QSR Sonic, Jimmy John’s and Dunkin’ Brands.

Brown said that the point of creating Inspire Brands was to get big, to generate cost savings in the process and adapt to a business rapidly evolving with new technology. The Dunkin’ acquisition gave the company 32,000 global restaurants and gave it an international presence it didn’t have previously.

“At 32,000 restaurants, we’ve achieved the goal of scale,” he said. “We’re not sitting here saying we need to do something to get bigger.”

He said that any acquisition would have to make both Inspire Brands and the acquired company better. Brown said the company looks at its acquisitions based on whether it can improve the brand’s capabilities—and whether it could learn from the brand it acquires.

For instance, Brown said Jimmy John’s helped its existing brands understand delivery more even if they’re not doing their own delivery—Buffalo Wild Wings designed its takeout-focused Buffalo Wild Wings Go concept in part based on what it learned from the sandwich brand.

Similarly, Jimmy John’s learned the importance of being on third-party delivery services’ marketplaces, even if the company still does the deliveries itself. “We try to be very thoughtful,” Brown said. “Not just because of the types of products they serve or the dayparts they serve. But do we think we can enhance their capabilities. And what capabilities do they bring to us. Are we going to be able to add value, will they add value to us?”

Brown also does not believe it needs to raise capital so much that it has to test the public markets.

Roark, which like Inspire is based in Atlanta, is a long-term industry investor. It does not flip many of its acquisitions or exit them—the 2015 Wingstop IPO being one of the few exceptions.

Brown said that Roark is “patient” and is willing to let Inspire make some big investments. “Our financial sponsor Roark Capital is phenomenal, allowing us to take a long-term view,” he said. “We’re making big investments right now. Some of these things are not inexpensive. And we don’t execute everything perfectly.

“Being able to have a financial sponsor that is aligned and patient is important.”