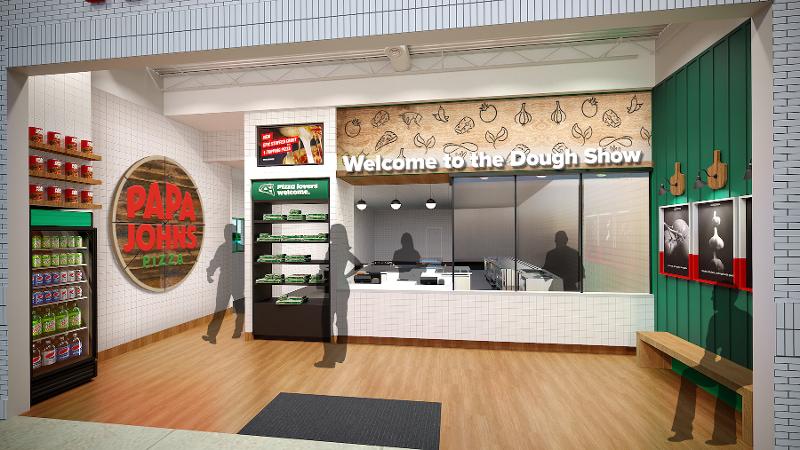 Papa John's expects to develop more locations in the next four years than it initially expected./Image courtesy of Papa John's.

Papa John’s on Thursday raised its projections for global unit growth, saying it expects to open as many as 1,800 net new restaurants worldwide over the next four years as franchisees ramp up development following strong sales growth.

The projection includes this year, when the company increased its development expectations for the year to 280 to 320 additional restaurants, up 40 from previous projections.

“Last quarter, we maintained our development momentum with strong new restaurant openings and significantly expanded and strengthened our pipeline with major new deals,” CEO Rob Lynch said in a statement.

Papa John’s sales outperformed its two primary pizza delivery rivals, Domino’s (-3.6% in the first quarter) and Pizza Hut (-6%), both of which cited struggles to meet demand amid a driver shortage. Papa John’s early in the first quarter warned customers of various shortages due to a lack of drivers and supply chain issues but has been able to overcome that in part because it has existing deals with third-party providers.

“Aggregators provide another channel to meet customers where they are, not to mention providing delivery help during peak times,” Lynch said on the company’s first-quarter earnings call. “Their marketplaces have become important places for consumers to discover brands.”

The first quarter was the 10th straight that Papa John’s outperformed the broader pizza category, a period in which the category has thrived as quarantined consumers ordered lots of delivered pizzas.

Lynch cited the company’s New York-style pizza for its sales performance, noting that the product has been popular with customers who appreciate the larger size slices and stretched dough. He also said Epic Stuffed Crust remains popular despite a lack of advertising.

Papa John’s stock was up 2% in early morning trading on Thursday.

Revenues rose 6% to $542.7 million. The company opened 62 net new units in the first quarter. Net income declined 70% to $10.5 million due largely to the suspension of operations in Russia and a charge related to the sale of the company's interest in a joint venture in Texas.

Papa John’s operates more than 5,500 locations systemwide around the world, including 3,354 in the U.S. Operations remain suspended at 188 locations in Russia.