Panera Bread Co. has been hyping a new service system as a turning point for the chain, if not the whole fast-casual segment. Wednesday, after keeping Panera 2.0 under wraps for all but a select group of investors, management finally divulged a batch of details about the enhancements that will be adapted over the next two years. 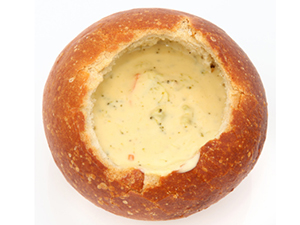 As promised, the new system will enable the brand to do more than merely field orders from patrons’ smart phones. Basically, the set-up multiplies the ways meals can be ordered, paid for and served.

For instance, they can now be served a large order without ever setting foot in a Panera. If the ticket is big enough, the food is delivered for free. The chain acknowledges that the service is really catering, though rechristened and marketed as Large-Order Delivery.

If a customer would prefer the expediency of takeout, an order of any size can be placed via phone app and retrieved at a special Rapid Pick-Up area in conventional Paneras, or from a new generation of non-traditional takeout and delivery outlets that will be built in urban areas.

The pick-up sections of traditional stores will feature a “status monitor” that shows how near to completion an order is, and shelves enable customers to grab a finished order and fly, explained CEO Ron Shaich.

If customers prefer retro-technology to a phone app, they can even use a landline (children, ask your grandparents) to call a new centralized ordering system that Panera will install.

Other tech components include in-store ordering kiosks and new order display screens in the kitchen. But not everything is digital; stepped-up staffing has cut kitchen production times by an average of 35 seconds per sandwich, Shaich said.

“Our ultimate intention is to have all production times under three minutes in a Panera café and to have no guest leaving a Panera because they grow tired of waiting in the line,” he told investors during a quarterly financial update.

The portfolio managers were warned that the cost of Panera 2.0 will temper per-store earnings for the six months following a conversion.

Shaich revealed that the Panera 2.0 package has been rolled into 14 stores in two markets. The tally will climb to 150 units by year-end, and elements of the overhaul will be in all stores sometime in 2015, he continued. The target for introducing the full program in all stores is 2016, according to the CEO.