For several years, Hank Holliday, owner of Peninsula Grill in Charleston, South Carolina’s Planter’s Inn, talked about doing a cookbook to showcase the restaurant’s culinary legacy. His vision was as ambitious as the restaurant, which had catapulted into national prominence soon after it opened in the mid ’90s. To create the weighty, lavishly photographed book he envisioned in less than a year, he turned to executive chef Graham Dailey and said “let’s self-publish.” 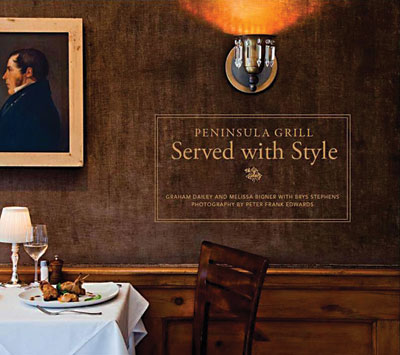 Many a chef dreams of authoring a cookbook, but going the traditional publishing house route has become more and more challenging—especially if you’re not a TV chef or celebrity. But these days, there are more opportunities to don the hat of “publisher” along with your toque. Self-publishing not only guarantees the book will be produced, it gives you more control over the end product. And while the upfront costs can be high, there is a chance to recoup more money from the sale of each book. Holliday bankrolled the project, budgeting $150,000 to $200,000 from start to finish; each book is selling for $60.

So how do you get from idea to printed book when your full-time job is running a restaurant kitchen? “You have to forget about your life,” Dailey says with a laugh. “But it was one of the most gratifying experiences I’ve ever had. Opening each new book still puts a lump in my throat.” Here’s how he and his team published “Peninsula Grill: Served with Style”.

1. Start with that team. Dailey began by reading other restaurant cookbooks to figure out where to start, but he soon tapped into local talent in the Charleston community for support: food writer Melissa Bigner, designer Gil Shuler, photographer Peter Frank Edwards and “project coordinator” Brys Stephens. Team members were paid a flat fee except for the chef—“it was just part of my job,” he says.

2. Agree on the goal. Recipes had to be winnowed down from 220 to 105. “We wanted the recipes to reflect the restaurant’s signatures but also include new dishes that we are transitioning into,” explains Dailey. He was also careful to select recipes home cooks could prepare.

3. Test the recipes over and over. This was the most time-consuming step—every recipe had to be tested four times to make sure it worked perfectly. Dailey, his sous chef and other kitchen staff who wanted to help pitched in to do the testing. “Stephens was the articulator; he translated everything into kitchen language, decreased the measurements from 30 servings to four and made sure everything was consistent,” says Dailey.

4. Set a schedule and stick to it. Three days a week were devoted to recipe testing, two days to photo shoots and two days to writing. “A lot of the writing was done at the restaurant,” Dailey recalls. “Melissa would interview me while I was prepping in the kitchen.” The chef did all the food styling himself, with some direction from Bigner to make the photos “less stark.” If rain spoiled a photo shoot or a big party interfered with recipe testing, they had to double up the next day.

5. Oversee the printing. Shuler had found quality printers in China and Iceland. “Shuler decided on Iceland, since he wanted to oversee the printing and take a fishing vacation at the same time,” Dailey explains. Shuler’s being onsite assured that the gloss finish of the pages was up to snuff—attention to detail that made a big difference in the end.

6. Determine initial printing. It was decided to print 5,000 copies for a first run. The books were shipped by boat to New York and trucked to Charleston where they are being stored at the hotel.

7. DIY marketing and sales. Initially, Peninsula Grill’s PR firm sent out a press release and a small luncheon was held at the Charleston Historical Society to promote the book. Plus a local shop—Heirloom Books—bought a few cases to keep in stock. The cookbook is also available through the restaurant’s website. Over 1,000 copies were sold in the first few months.

Word-of-mouth turned out to be the best initial publicity. A house copy is always on hand in the restaurant, and the sommelier or a server trots it out for people to look at. “This turned out to be a great sales tool,” notes Dailey.

Suppose you want to get a cookbook out but don’t have deep pockets to finance it? There are still options, including print-on-demand websites and contracting with a packaging company to develop the book.

Print-on-demand is the least expensive. Sites such as Amazon’s CreateSpace.com, LuLu.com and Ingram’s LightningSource.com offer basics like cookbook templates and stock images as well as upgraded services, which include design, editing, marketing and distribution. Prices range from $300 to $5,000, depending on the package.

Blurb.com offers a slightly more customized product. Customers can choose from a variety of paper qualities and submit their own layouts. Bookmaking tools are free and there’s no fee until you order.

There are several downsides to print-on-demand: there’s a strict limit to the number of pages, photos and art that can be used; there is minimal support; the software can be tricky to master; and the lower-end packages often look that way. Plus, the publisher (i.e. the chef/restaurant) has to pay $25 to $30 per book, considerably trimming the profit margin at resale.

Book packagers that offer self-publishing options will cost more upfront but the wholesale price of each book will be less. Many also provide project leaders to guide the cookbook from start to finish. Here’s what to expect:

The “publisher” pays a one-time fee of $20,000-$50,000 for development costs, including editing, layout, proofing, etc. The restaurant or chef is responsible for recipe testing.

Average number of pages per book is 200, with recipe count ranging from 75 to 120, depending on photos.

It takes from 18 to 24 months to get a book from idea to completion, but the time frame can be shortened to 12 months (still much longer than print-on-demand).

Printing and binding costs are separate. Typical print runs are 5,000 copies and average price per copy to the self-publisher is about $8 to $10. That means the book can sell for between $24.95 and $29.95 retail.

Warehouse storage and fulfillment services may also be included.