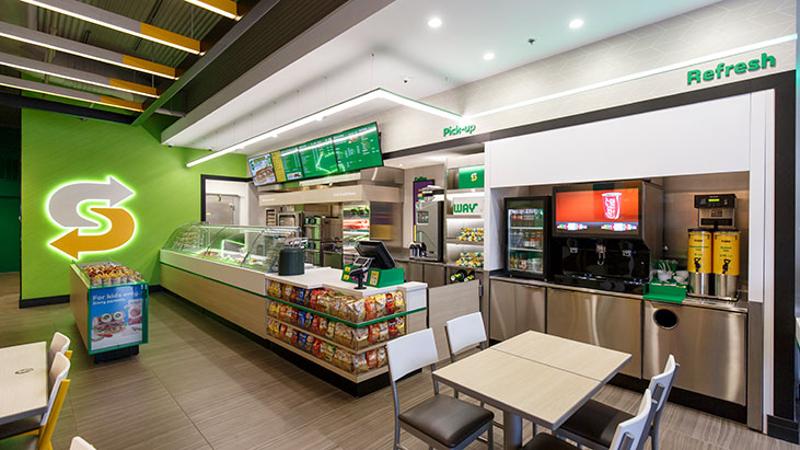 The Subway sandwich chain is engineering a new design, menu and operational procedures for its restaurants in a bid to rejuvenate the brand.

Every customer touch point has been updated to foster a fresh impression, said VP of Operations Trevor Haynes. Those tweaks include showcasing the produce used for Subway’s sandwiches behind the production line to remind customers the peppers, tomatoes, onions and cucumbers garnishing their sandwiches are fresh and cut in the stores.

Employees might turn around, grab an item from one of the bins that are positioned at customers’ eye level, and slice it right there, says Haynes.

Other operational changes include providing enough space for a second production that franchisees can use for takeout or delivery orders.  (The whole 44,800-unit Subway system is franchised.)

The ovens where Subway bakes its bread and cookies have been moved forward to embellish the sense of freshness, says Haynes.

Technology figures large in the redo, which Subway has christened Fresh Forward. Guests will be invited to place orders via self-service kiosks. A pickup station is included for to-go and delivery orders placed via smartphone app or Messenger chat bot. Subway already offers order-and-pay-ahead service.

“We’ve looked at our throughput,” says Haynes. “How do you maximize throughput? How do we take orders from kiosk? You have a display in the back room. That’s all been worked through.”

Similarly, “we’ve looked at what we do from a labor standpoint, everything from food prep down to how frequently deliveries are accepted,” he says. The efficiencies include using scoops for some sandwich ingredients, so a serving doesn’t have to be weighed out before a shift, and installing dishwashing machines in all units.

The new stores will use baskets for dine-in orders, rather than wrapping every sandwich as if it’s for off-premise consumption.

A nod to customers’ reliance on their smartphones extends into the dining rooms. Complimentary Wi-Fi will be provided, along with USB charging ports.

The chain is also switching to digital menu boards.

The reimaging also includes touches intended to make dine-in guests more comfortable. Hard seats are being replaced with more comfortable versions, according to Haynes, who notes that contemporary music will be aired in stores.

The menu is being tweaked with such additions as housemade pickles, pico de gallo and gluten-free bread. Haynes suggested that further changes are in the works.

Haynes describes the design as more contemporary, “from the color scheme to the finishes, the technology, the display of food.” The look is intended for a global audience rather than merely a U.S. clientele, and extends to packaging and crew uniforms.

New stores could cost as much as $320,000 to build out, Haynes said. Renovations should run far less, but he declined to provide a range, saying the cost is still being determined.

“We have about eight different designs, from a kiosk up to a full freestanding unit with a drive-thru,” he continued. The options for franchisees are being tiered into three cost brackets, with the specifics yet to be determined, he said.

Twelve units sporting the new design and layout have been opened as test stores, Subway said. Elements of the makeover should be in place worldwide by the end of 2017, the company said in a statement.