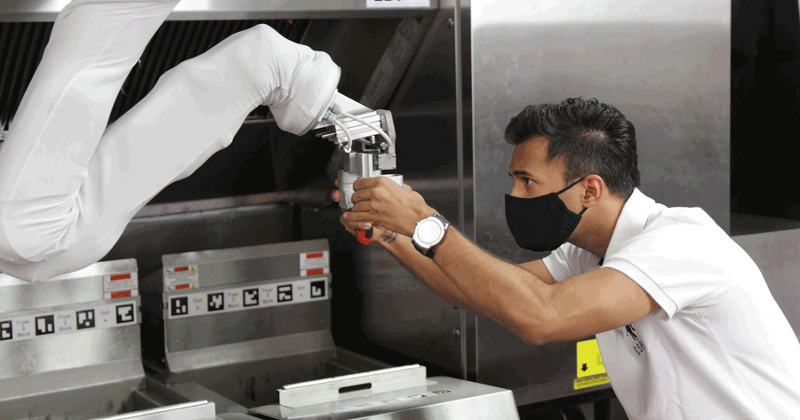 Flippy is ready to take on the world.

After four years of development, the burger-grilling, french-frying robot hit the global market Tuesday, riding a wave of interest from QSRs and ghost kitchens amid the COVID-19 pandemic that has put an increased focus on automation.

“Post-COVID, really everyone’s trying to figure out how to deal with this new normal,” said Buck Jordan, president of Miso Robotics, the company that makes Flippy.

The latest version, known as Flippy ROAR (Robot-on-a-Rail), mounts Flippy’s robotic arm on an overhead rail, allowing it to move between kitchen stations while taking up less space. The arm interacts with a hopper that dispenses food in consistent amounts, and a touchscreen display shows what’s in line to be prepared and allows employees to make adjustments if needed.

Flippy can fry up to 17 items, including french fries, chicken tenders, fish fillets and onion rings. It can grill burgers and Impossible burgers, though that ability won’t be added until the first half of next year, Jordan said. Flippy’s software has the ability to learn new menu items as well.

Robots have the potential to make restaurants more efficient and consistent, reduce labor costs and, in the age of COVID-19, allow for fewer humans in the kitchen. While questions remain about robots’ speed, safety and the replacement of human labor, Miso has seen plenty of interest from restaurants, Jordan said. The company has had discussions with “pretty much any QSR you can name,” he said. “They’re all just curious and fascinated by ‘How do I solve the automation problems?’”

Flippy can handle 60 baskets an hour at the fryer, Jordan said. Return on investment is “highly variable,” but in restaurants with lots of fried menu items, the bot could do the work of one or two full-time employees; at a burger and fry chain, Flippy could account for up to four to six hours of human labor, he said.

A single White Castle restaurant in the Midwest is testing a Flippy ROAR prototype this fall.

Jordan said he couldn’t share results “for another few weeks,” but that Flippy is live and “it’s going great.” Earlier versions were tested at CaliBurger units, Dodger Stadium and the Arizona Diamondbacks’ Chase Field.

Though QSRs stand to benefit most from Flippy’s capabilities, ghost kitchens represent another emerging market for the robot.

“We’re getting a lot of interest from ghost kitchens,” said Jordan, who views the multibrand, off-premise-only spaces as ripe for the efficiencies offered by automation.

A ghost kitchen housing 15 restaurants, for instance, likely has a separate fryer for each tenant that uses one.

“You don’t need 15 fryers—you probably need just a handful,” Jordan said. “Instead of buying 15 sets of fryers, buy three [and] put a robot over it to help it make all the food in the system.”

That scenario assumes all the brands would be OK with a shared fryer, but “centralized frying” is something Flippy could do, Jordan said.

And how about independents? Miso has been fielding requests from all kinds of restaurants, but the company is currently focusing on large installs for chains.

“It’s honestly kind of a bit of a flood,” Jordan said. “We’re not able to set up for onesie-twosie mom-and-pops.” But Miso hopes to eventually make the system more self-service and self-setup, opening the door for independents to use Flippy, he said.

Flippy ROAR costs $30,000 upfront, with a $1,500 monthly fee. By next year, Miso is hoping to provide the robot itself for free, with a monthly fee of $2,000, Jordan said. The company is currently offering special financing options.