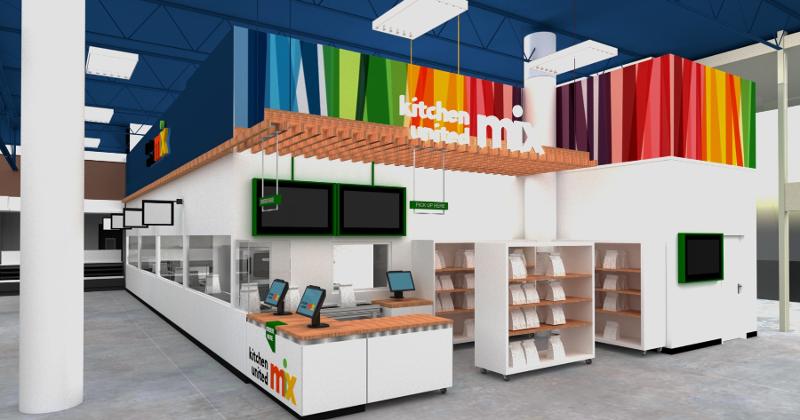 Image courtesy of The Kroger Co.

Kitchen United is bringing its ghost kitchens to grocery stores.

The company has partnered with grocery giant Kroger to put its multiconcept, off-premise restaurant centers inside multiple stores, starting this fall at a Ralphs in Los Angeles.

Each location will house up to six local or national restaurant brands. Shoppers and off-site guests will be able to order takeout from any combination of those restaurants using either in-store kiosks or KU's website or app.

Setting up shop in grocery stores continues a recent evolution for KU. In the past year, its initial network of low-profile, warehouse-like facilities has grown to include more visible locations, in a California mall and in Chicago's downtown Loop.

In partnering with Kroger, KU links itself to one of the largest grocery chains in the U.S. The Cincinnati-based retailer has nearly 2,800 stores across the country under banners including Ralphs, Fry's, King Soopers and more. Opening in even a few of them will put Kitchen United and its restaurants in front of a lot of new potential customers.

"Kitchen United recognizes the significant value of Kroger as a strategic partner," KU CEO Michael Montagano said in a statement. "We see a great opportunity to introduce our partnership in cities across the country."

It is not the first ghost kitchen company to break ground in grocery stores. Canadian provider Ghost Kitchen Brands has a similar agreement with Walmart that will bring it to at least 30 stores in the U.S.

"This collaboration creates another seamless way for our customers to order lunch or dinner for pickup while they shop for groceries or for delivery to their location of choice," he said in a statement.

The Ralph's location will bring KU's unit count to seven. Its website lists 10 additional centers in the works, in Southern California, Texas, Florida and New York.

"Kroger is the perfect partner as we grow our reach and variety of business verticals in addition to our well-known ghost kitchen facility model," said Atul Sood, KU's chief business officer, in a statement.