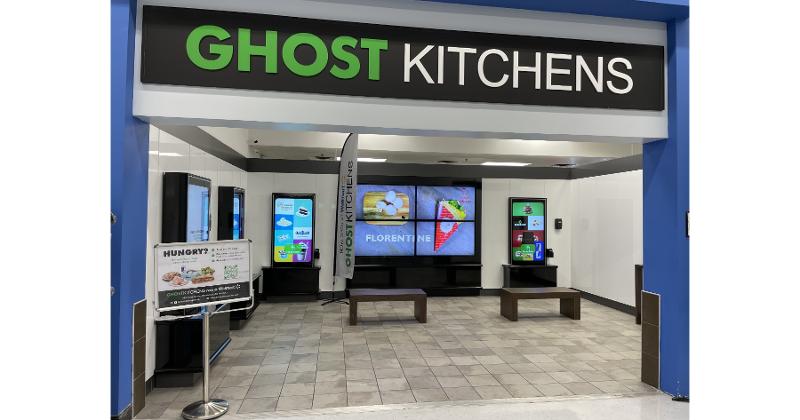 Whether they like it or not, ghost kitchens have developed a reputation for secrecy, at least among consumers.

It has to do with where they’re sometimes located—in out-of-the-way industrial corridors or empty parking lots—as well as their business model, in which a customer might be unaware that their Chick-fil-A sandwich is not coming from an actual restaurant but a warehouse shared by multiple concepts.

That model tends to eschew physical storefronts for virtual ones, on third-party delivery marketplaces and other digital channels. Ghost kitchens' front of house, in other words, is the internet.

However, that approach appears to be changing in some corners as new providers focus on reaching guests in person in addition to online.

One of these is Ghost Kitchen Brands, a Canada-based company that is growing its “virtual food halls” through Walmart stores and other nontraditional locations.

When the company started in 2017, however, it operated more like a traditional ghost kitchen. Founder Geoge Kottas, a restaurateur, sought out cheap rent in little-trafficked areas that could serve as delivery hubs, populated by brands Kottas created himself.

But as it has evolved, “We realized that we could pivot our business model and still do delivery, but take that business model of convenience to consumers outside of just delivery,” said President Marc Choy. Ghost Kitchen started scouting locations with high visibility and foot traffic such as retailers, airports and universities.

It also began phasing out its own brands and replacing them with national ones like Quiznos and Saladworks as well as Red Bull and Ben & Jerry’s. Customers can order from any combination of those concepts via mobile app or in person at large touchscreen kiosks.

Ghost Kitchen operates all of its locations via licensing deals with the brands. Each kitchen staffs about two or three employees who are cross-trained on the various concepts, which require only light cooking.

Its 25 Canada locations get a lot of walk-in business from noon to 7 p.m. when people are out and about, he said. Then, delivery starts to pick up until after midnight.

The concept is now replacing McDonald’s in five Walmarts in Canada, and 30 Walmart locations are under construction in the U.S.

“Why use real estate to offer one brand when you can use that 3,000 square feet, put a ghost kitchen in and offer 15 different brands?” he said of partnering with nontraditional locations.

Ghost Kitchen's goal is to have 800 U.S. units, or enough to reach every urban consumer within 30 minutes, Choy said.

C3, a multiconcept restaurant venture from businessman Sam Nazarian, is another ghost kitchen company taking a more visible approach. It currently has a network of more than 200 digital kitchens in hotels, apartment buildings and Reef units in the U.S. But the bulk of its ghost kitchens operate out of its existing brick-and-mortar restaurants like Umami Burger. And its new multibrand ghost kitchens in Graduate Hotels and Kenect apartment buildings have street-facing storefronts as well.

Those physical locations are key to its strategy.

“With C3 and (parent company) SBE, we really believe in the front-of-house guest experience and creating a brand and experience that can then be translated to an online experience,” said Joey Simons, C3’s VP of operations.

“We’re an IP company,” he said. “We believe in creating intellectual property that resonates with people.”

The ultimate goal is to establish as many guest-facing restaurants as possible to build brand equity, and then to “popularize those brands across the country virtually,” Simons said.

C3 took a key step toward that goal this week when it launched Citizens Go, a mobile app housing all of its brands in one place. Users can mix and match orders from multiple concepts in the app for delivery or pickup. And it offers perks—including benefits for customers who dine in.

Ghost Kitchen Brands is focusing on the front-of-house experience as well. Last week, Choy had a meeting to discuss installing a robot that makes popcorn and hands it out to customers.

Its locations have minimal seating and no guest-facing staff other than a greeter who helps explain the ordering process. There’s a learning curve with the concept, Choy said, but customer feedback has been overwhelmingly positive.

“The response has been very, very good with consumers,” he said.