TGI Friday’s and Ruby Tuesday are among tens of thousands of restaurant companies that received federal stimulus loans of at least $150,000, according to new data and information released by the U.S. Small Business Administration on Monday.

Other struggling casual dining chains also received the funds, including the Bravo Cucina Italiana and Brio Tuscan Grille chains, O'Charley's, Famous Dave's and Uno Restaurants, according to the federal loan data, which was released in part to counter criticisms that large corporations, rather than small businesses, were the biggest beneficiaries of the fund.

Indeed, the information shows that the $521.83 billion lent to date through the PPP was distributed in allotments averaging under $100,000 each. Restaurants, and mom and pop operators in particular, were intended to be prime beneficiaries. If the borrowers met certain spending requirements, including a retention of their staff, they would be rewarded with having the loan forgiven. It would essentially turn into a grant.

The data show that many small businesses received such funds. The vast majority of loans made to restaurants were to small operations, including small-scale franchisees of major brands.

Overall, restaurants and other hospitality businesses had borrowed $41.88 billion as of June 27, or just over 8% of all loaned funds to date. That level ranks the industry fifth among all PPP beneficiaries. Most of those loans were small, under $150,000.

Nearly 50,000 restaurant companies received loans of over $150,000, according to a Restaurant Business analysis of loan data.  These recipients say that 3.3 million jobs were retained as a result of the loans.

More than two-thirds of those loans went to full-service restaurant companies, at least based on the federal code that designates what type of business the company operates in—though a search through the loan data found several instances of companies that were misidentified. For instance, several McDonald’s franchisees were given the federal identification code for full-service restaurants. 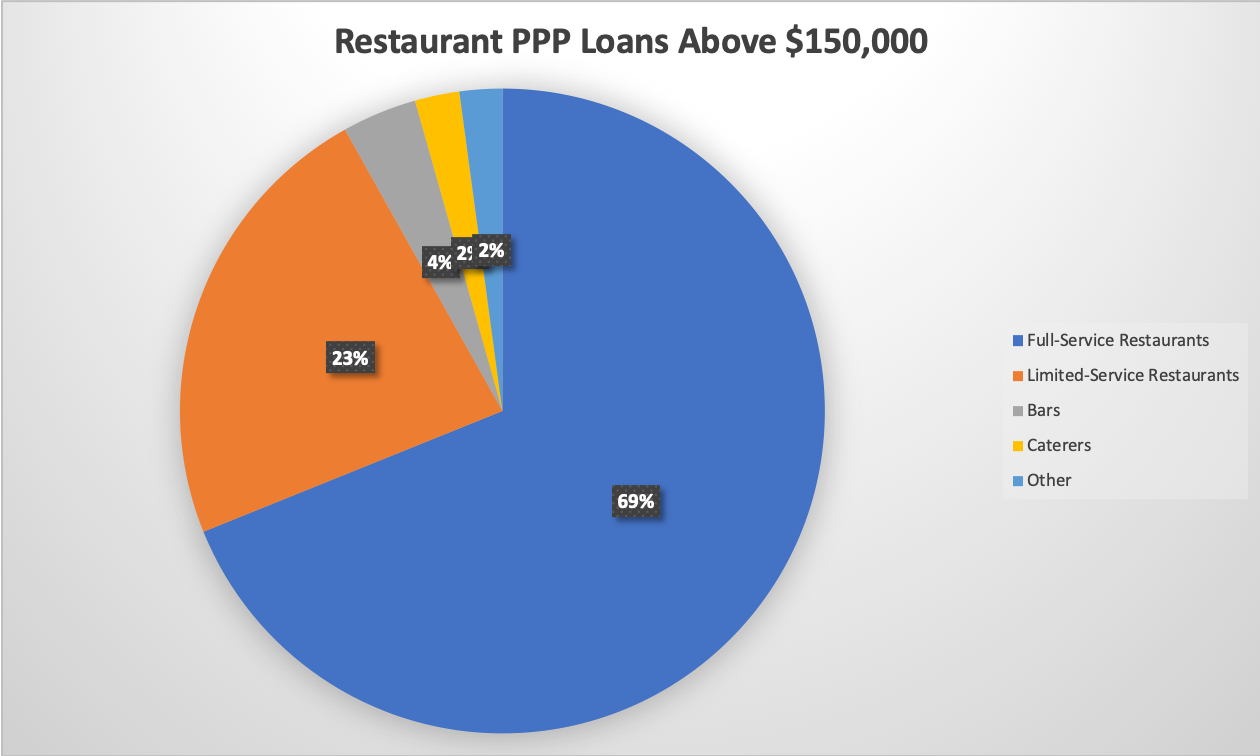 Still, the data indicates that full-service restaurants, the vast majority of them independent companies and small chains, received the bulk of the loans.

“The PPP is an indisputable success for small businesses, especially to the communities in which these employers serve as the main job creators,” SBA Administrator Jovita Carranza said in a statement.  “Today’s data shows that small businesses of all types and across all industries benefited from this unprecedented program.”

What’s become known as the PPP Loan List was released as lawmakers and Trump administration officials are beginning to air proposals for another round of relief and stimulus financing. Among the suggestions aired already have been a tax credit to encourage travel, a cash award for furloughed employees who return to work, and rent assistance for small businesses.

“We urge federal policymakers to dive into [the list] to determine how best to devise support for small businesses like restaurants that are clearly on the ropes,” Sean Kennedy, EVP of public affairs for the National Restaurant Association, said in a statement. “Countless restaurants across the country used a PPP loan to keep their employees on the payroll even while shuttered, but they are emerging from the program with challenges that have only grown in scope. For many, this uncertainty will linger until a vaccine is available.”

While small brands mostly received funds, Restaurant Business found several examples of privately-held restaurant chains that received loans through the program. Many of these chains didn't get the attention that other publicly traded chains, such as Ruth's Chris, Sweetgreen or Shake Shack, did early in the fund's history.

Uno Restaurants, TGI Friday’s and Ruby Tuesday, each of them struggling as the pandemic worsened already difficult conditions, received PPP loans of between $5 million and $10 million apiece. Famous Dave's and its recently acquired Granite City Food & Brewery each received at least $5 million.

Bravo Brio received its funds in June, after the company was sold out of bankruptcy court to the Robert Earl Group.

Franchisees of major brands were big beneficiaries, with a lot of companies using the funds to ensure they could survive the pandemic.

McDonald’s franchisees were frequent users of the PPP fund. RB found 78 companies with McDonald’s somewhere in its name on the list of companies. That’s likely a significant undercount of the actual number of the chain’s operators that received such loans, as many franchisees operate with different names.

Similarly, at least 20 restaurant companies with Subway somewhere in their name received such funds. In that chain’s case, many operators could have received loans under $150,000, given the chain’s low average unit volumes of about $400,000 and a high number of small-scale operators. So the actual number of Subway operators to receive PPP loans is certainly much higher.

Maybe the most aggressive group, however, was Hooters franchisees. We found at least 34 loans made to different Hooters restaurant operators around the country. That includes 11 that operate out of the same address in Clearwater, Fla., including large operator Hooters Management Corp., which alone received between $2 million and $5 million.

The PPP was extended last week to give small businesses such as restaurants a chance to borrow much-needed funds as their states allow them to resume operations that were shut in March to slow the spread of coronavirus. About $130 billion is still available for loans. The program is now set to expire on Aug. 8.