The inaugural NolaLoyola: Live to Eat, a scholarly symposium celebrating the culture of New Orleans, culminated in a candid restaurant discussion that had the audience laughing. Iconic local food figures Leah Chase of Dooky Chase Restaurant, JoAnn Clevenger of Upperline Restaurant, and Ti Martin of Commander's Palace related their experiences with the wit and straightforward charm one expects from New Orleans restaurateurs. 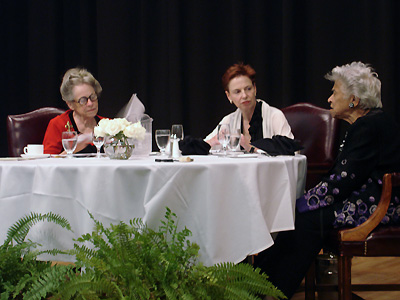 Entitled, “New Orleans on a Plate: A Conversation about Legendary Fare,” the keynote panel presentation was as casual as the seminars were scholarly. Wine was poured, the table set and Martin steered the conversation with some prepared questions and experiences of her own.

Do you think young cooks today know the difference between New Orleans, Cajun, Creole, Southern, and the Delta? And does it matter?

JoAnn Clevenger: I have very mixed feelings. I fear that because of the allure of television cooking programs that young chefs are tempted to emulate those they see on TV, and they’re not giving enough thought and exuberance to the food they’re in. It’s not trendy. And I think they see themselves as competing with the chefs on television. That worries me a lot. I see a trend, nationally, to be trendy for the sake of being trendy. As a result, if you go to a restaurant in Chicago, Minneapolis or Atlanta, the menus are very similar, and yet they all think that beef cheeks are the thing to do this year.

The difficulty with Creole cuisine is that has been around 150 years, and it’s not considered avant-garde. But, it’s continued to evolve! In the past 10 years the Vietnamese started planting their own gardens, and suddenly you could find fresh watercress in the markets, and more than one kind of fresh basil. The ingredients the Vietnamese brought here have had a huge influence on Creole cuisine, because Creole didn’t stop in 1922, 1962 or 2002. It evolves depending on what the chefs, the restaurateurs and the home cooks get excited about. And I think we’re cutting edge with that [in New Orleans].

Chase: When you talk about Creole, people want to know, “What is Creole?” People don’t understand us at all. So I tell ‘em, “Don’t try to.” We are as far south as you can get, without jumping off into the Gulf. We don’t cook “southern food." We’re just a bunch of weirdoes all around. We cook what we want, and we cook different. That’s what people come to New Orleans for; they want different tastes, and different places to go.

Ti Martin: When our young chef took over almost 10 years ago, I asked him, “Name the last four chefs at Commander’s.” Like everybody, he could only name three, and commented, “I don’t know the other guy.” I said, “That’s my point. Don’t be that guy.”

If you flew in from anywhere in the world on an airplane, blindfolded, and we gave you one bite of our food, we’d want you to say, “Oh, I’m in New Orleans.” We don’t want it to taste like something you had in Cincinnati.

I want to know what you ladies think about “molecular gastronomy.”

Clevenger:  I have to admit, I did buy [Nathan Myhrvold’s “Modernist Cuisine”]. They’re sitting right behind the maître d' stand at the restaurant. I’ve opened them a few times and they’re very intense. I admire them, and I want to learn from them, and I think if I did, I could find some nuggets that would be practical, exciting, and exuberant. But it’s a whole additional language that I don’t have yet. I’m hoping at some point I can hire somebody to work in the kitchen and they can teach me. I think I can learn it, because at one point I knew nothing about wine. I grew up a small-town, Louisiana Southern Baptist. I was able to learn wine just fine!

Martin: I have this memory of my mother [Ella Brennan] and my Aunt Dottie sucking foie gras out of open-ended test tubes. They were looking at me, because I’d told them not to say anything, and I’m thinking, “This is stupid.” I’m hoping it’s like nouvelle cuisine where you can find useful pieces, even if you can’t use all of it. Overall, I don’t want somebody telling me how to eat my dinner.

Chase: And I don't want to eat out of a test tube.

Is food or service more important in fine dining?

Chase: Food is important, but service is most important. You can have perfectly cooked food in a beautiful place, but if the service is bad, you don’t remember the rest. And it’s hard to get young people to understand that today. It’s like going to the opera, or the theatre. After the show is over, if you enjoyed it, you applaud. After the meal is over, if you got good service, you tip.

Tell your staff to create their own raises. “You don’t have to wait for the boss to give you a raise. By your service you create your own raise.” It’s about having pride in what you do. I’ve had employees come up to me and say, “Miz Chase, this person has an attitude.” I’d say, “Well, it’s up to you to change it. Once he comes in that door it’s your job to make him feel good.”

Clevenger: I think part of the problem is people don’t want to be thought of as “service.” Remember, the original meaning of the word “restaurant” is “to restore.” Any restaurant can be a restorative–from a diner with apple pie to haute cuisine–if they look after their guests. It’s not a lost art, but one that we don’t find as often. If you have the choice of going to a restaurant that makes you feel good, versus one where you enjoy the food but always feel slightly unwelcome, you’ll go to the one that makes you feel good.

Martin: Food and restaurant writers, in my experience, only talk about the service if it’s bad. I find it’s the harder of the two to accomplish day in, day out. For me, it’s an honor to serve people, and that’s hard to teach. But if you can get the culture going in-house, it works out very well. I asked our chef once during a pre-service meeting which was more important. He thought for a few seconds, and said, “Service.” And that made a huge impact on the rest of the staff.

What makes a dish “iconic”?

Chase: You have to let people get creative sometimes, because they can add to what you have. People come into my restaurant and they want sweet potato pie because they saw it on TV.

Martin: I’ve learned that the dishes that have stood the test of time, more often than not, were made for some occasion. When we were getting ready to open Palace Café, I told the chef, “There’s a law in New Orleans. You have to have either bread pudding, crème caramel or bananas foster on the dessert menu. He didn’t want anything to do with them, but he thought about it and said he had an idea to put white chocolate in the bread pudding. I told him that was a horrible idea. Just terrible! He came back with it four hours later and I told him, “Go write down whatever it is you just did!”

Do you ladies read the online reviews?

Chase: No I don’t. [nodding at Clevenger] I know she does.

Martin: I don’t either, but I went to Portland recently, and I’d never been there. So, I went online to look up some of the restaurants. There were so many mean, nasty things written about perfectly nice restaurants that I was horrified.

Is there a place in any restaurant for a dress code?

Clevenger: That’s an interesting question. I don’t know how to deal with it anymore. It’s very difficult for me. Say a group of eight people gets out of a taxi, and some of them may be in very short dresses, and one guy has on shorts. They came all the way uptown. Sometimes, I try to pretend I didn’t notice. It’s a difficult thing!

But, the rule is not for me, it’s for the guests. They’re here because it’s a special occasion. Restaurants are in the business of making memories, and suddenly that’s interrupted by the slapping of some flip-flops.

Chase: I tell them, “I’m sorry, I just can’t serve you this way.” There was a time I didn’t serve people in jeans, because jeans meant you’d been picking strawberries. I didn’t want to see jeans where people were sitting down to dinner. So here comes this V.P. who had a whole [denim] suit. And I told him I could not serve him. The next day he came in his tuxedo. You have to stick to your guns. It’s harder to do now. Now, I have people coming in for lunch with shorts on, but I will not serve anybody in my dining room, at dinner, in shorts. I am sorry.

Martin: I think Commander’s was the last restaurant to give up on jackets. Now we say, “Jackets preferred, but not required,” and try to give everyone a hint. There ought to be a couple restaurants in every town where you can go out for a special occasion and not have to look at the armpit of the guy next to you.

Tell me one restaurant in New Orleans you consider a hidden gem.

Chase: Rue 127. It’s a nice little place. The menu is short, but the service is good. They have a young chef who went to school with my grandson. http://www.rue127.com