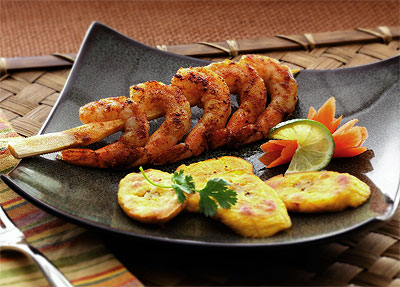 Seasonal supply: As fall turns into winter, Pacific waters are yielding an abundance of Dungeness crab, snow crab, halibut, cod and Oregon cold water shrimp, says Bob O'Bryant, marketing director of Pacific Seafood near Portland, Oregon. Ken Talley, editor of Seafood Trend Newsletter out of Seattle agrees that this will be a great season for Dungeness crab. "Although it's still expensive—around $5.50 per pound compared to $6.25 last year—the crab has more meat and great taste," he says. The sockeye salmon season is over, but it was a very good catch and there's lots available—mostly in frozen form, Talley adds. Farmed salmon should be plentiful; Chilean supply is ramping up after last year's virus, and more is coming in from Norway and Canada. "Salmon prices should be coming down a bit," notes Talley. That prediction comes on the heels of "shockingly high prices for salmon—up $1 to $2 a pound wholesale," according to Keith Decker, president of High Liner Foods.

"The best solution to assure supply and keep a lid on costs is to offer a mix," says Talley. "Fresh and frozen, farmed and wild, imports and domestic."

After the oil spill: The Gulf crisis has had the most effect on shrimp and oysters. "Even if you're not buying seafood from the Gulf of Mexico, the oil spill has boosted the price of shrimp," says Decker. Disease in Indonesia and export problems in Mexico have also diminished supply of farmed shrimp. A shortage of large shrimp from Thailand and increased global competition from Vietnam and China are also pushing up prices, explains Talley. Smaller shrimp are the best buys. "More of the Gulf is now open for fishing, but no one will know the long-term effects until next spring," he adds. However, Gulf fishermen are now bringing in ample catches of many species.

Aquaculture update: Around 84 percent of the U.S. seafood supply is imported and nearly half of that is produced by aquaculture, according to NOAA. Farmed shrimp alone account for 80 percent of the world's shrimp supply, reports Pacific Seafood's O'Bryant, and newer farmed species, like pengasis (Asian catfish) and Vietnamese swai are joining standbys such as salmon and tilapia. While United States aquaculture lags behind that of other countries, activity is ramping up. American catfish and trout, perch from Indiana, Kona kampachi from Hawaii and orange steelhead salmon cultivated in Pacific Seafood's facility on the Columbia River are some of the "home-grown" species available. And U.S. facilities are raising the bar on standards. "ACC (Aquaculture Certification Council) accreditation is a priority now to guarantee health, safety and sustainability," explains O'Bryant. "To be certified, facilities must comply with a four-star checkoff program that covers everything from fish feed to plant operations to social responsibility." Imports are also gaining certification, but some emerging countries are not up to speed. The best advice: know your supplier and check for ACC certification.

News from the sea: Vendors are offering seafood options that fit with today's trends.

Gluten free. Battered and breaded fish and shellfish have not traditionally fit into gluten-free diets, but the seafood industry is working to fill that void. "It took three years to develop gluten-free battered halibut, cod and haddock that was approved by the Celiac Association but mainstream enough to appeal to people without celiac disease," says O'Bryant of Pacific Seafood. Italian breaded sole and panko breaded butterfly shrimp are other options in the gluten-free line, which is slated to expand.

New coating systems. Although batters and breadings still rule on value-added products, lighter coatings are the new wave. Boneless pieces of tilapia, cod and salmon with minimal coating are not only healthier, they can be cooked on a flat-top grill in operations that don't have a lot of back-of-house equipment, notes Decker of High Liner Foods. Products that fit these specs include an herbed rotisserie-roasted pan seared cod and a honey chipotle wild salmon.