Culver’s, a quick-service burger chain that started in Sauk City, Wis. and now has 451 restaurants in 19 states, married its “Welcome to Delicious” story across traditional and social media. At the NRA show in Chicago, the family-oriented chain, famous for Butterburgers and frozen custard, shared how this approach created zealous brand advocates out of its fans. 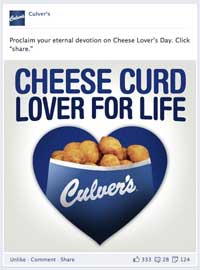 These are the six steps Culver’s used to close the gap between social and traditional media:

1. Social media requires investment.
Social media is not free. “We ended up cutting back on radio and newspaper advertising,” said David Stidham, Vice President of Marketing for Culver’s, “in order to commit to social media in a more comprehensive manner.”

Culver’s is active on Facebook, Twitter, YouTube, FourSquare and Google+, with both email and text message loyalty programs, an app and a website (which is also mobile-friendly). While Google+ is not the strongest of these outlets, it adds weight in the Google search results. “The search component alone is worth having that presence,” said Stidham.

Dana Arnold, PR and Social Media Director of Hiebing, a marketing and ad agency working with Culver’s, recommended letting the early adopters jump into new platforms first (referencing Pintrest), then waiting to see what happens. The risk of disappointing fans increases when a brand spreads themselves too thin across multiple platforms and can’t interact with them consistently.

2. Clearly define goals and strategies.
Do you want to gather more followers? Are you looking to boost brand loyalty? Or just wanting to increase sales? Create promotions that coincide with the goals you’re attempting to achieve.

Social media should be tied directly to your promotional calendar and be a part of your larger communication plan. Promotions layered between social, television, tabletop, POS and more create a bigger impact. It’s also important for your staff to talk about any online programs with guests while they are in house.

3. Connect first, broadcast second.
Engage guests with topics they care about. Culver’s uses “passion products” that the customers are enthusiastic about, but are not in the larger promotional calendar – such as its Lemon Ice beverage.

“Two years ago, we’d have talked about conversations as the way to engage. For example, asking, ‘What are your plans for the weekend?’ But that’s not the space we’re playing in today,” said Arnold. “People are fans of brands because they love them.” She encouraged talking more about your products, but in a fashion that shows you’re paying attention to customers’ interests.

Culver’s pushes its custard “Flavor of the Day” program through all its digital efforts, in house, and in print.

They key is to differentiate the brand in the online space.

Company websites are a great place to put content that can be shared, and Culver’s has “share this” icons throughout its website. “Digital content is the only medium out there where, the more it’s consumed, the bigger it gets,” said Stidham. “You are better able to grow your message by having the sharable option on all of your touchpoints.”

5. Surprise and delight are mandatory.
Engagement is what translates into advocacy. Generate insightful and visual posts in the social space, then ask your followers to share them. “They are far more likely to share or retweet if you ask them to,” said Corwin.

For example, within minutes of Culver’s sharing a photo of a heart-shaped fried cheese curd, over one hundred people shared it with their friends. The kicker? It was a photo submitted by a guest. “The impact is greater when your guests post something and it goes viral, versus when you as a brand post something,” said Stidham. “We love that we have a blend of engaging guest content as well as our own.”

Culver’s even goes so far as to publically reward guest content with a free meal. “If I have a 1,000 people posting pictures of themselves having a great time at Culver’s, I’ll give away 1,000 value baskets a day, because it’s only going to spread,” remarked Stidham. “We want people to see that that behavior is rewarded and continue to grow it.”

The company also generates contests and sweepstakes, but they come at an expense. The biggest key to a successful contest is to make it simple. Don’t make followers jump through hoops or do five things to enter. The easiest way to make them put a little skin in the game is having them hit “Like” to enter.

The Big Secret: The first 10,000 to enter the sweepstakes by “Liking” the page got a secret new menu item for free. The limit was reached within a few hours after it was announced.

Hometown Hall of Fame: Guests were encouraged to write in and nominate everyday heroes in their community. The promotion had no sales or product tied to it, but amplified the Culver’s story. About 1,500 people participated, sharing a story on someone they cared about, and sharing it with their friends. The nominations were thrown open for voting, which meant even more sharing. “We actually brought it down to the restaurant level and put out table tents on all the tables,” said Stidham.

Catch of the Day: Cod was the hero during Lent. Followers could virtually fish three times a day. They’d catch fish facts, jokes and coupons for free fish sandwiches. “It’s one thing to offer a free item, but another to do it in an engaging entertaining way,” said Stidham. “I’d rather have 300,000 active, engaged fans than three million that are there for a freebie. We’re growing our audience organically, but we know we’re getting fans who are true advocates. “

And the campaign that flopped?

Strut Your Stuff. Followers were asked to take a video of themselves doing the chicken dance and submit it to the Culver’s Facebook page. A complete dud, the company learned the hard way what their audience was not capable of, or unwilling to do.

6. ROI exists, so use it.
Within Facebook Insights, check out the “Talking About This” metric to see how many people are interacting with your content. There are similar tools for Twitter.

Confirm which days of the week and times of the day are generating the most hits. For Culver’s it was Monday, so that is the day the most important promotion item is launched for that week.

Throughout the process, Culver’s has been able to see the fanaticism for the brand among its followers. In addition to posting a lot of their own content, Culver’s fans will also step up and respond to customer service complaints or other negative posts.

As does Culver’s management. “Interactive dialogue is important day in and day out,” said Stidham. “We’re creating a deeper, stronger relationship with those negative responses by asking what we can do to improve that experience. They really do appreciate that we reach out to them.”

Successful restaurants have always known how to connect to their guests. While the social media channel is new, the philosophy remains the same.  Great service equals a great experience and repeat business. If you’re lucky, a little word of mouth marketing is thrown your way. Social media is just an extension of your existing relationship with your guests while they’re in-house.