It’s not quite an avalanche, but iPad point of sale software is unfurling out into the marketplace at a heightened pace. Touting wireless connectivity, anywhere, anytime access and quick response to menu and room changes, the field is crowded with options, as newcomers to the market, like Lavu and Breadcrumb, join more established POS vendors like Micros, Revel Systems and Aloha. 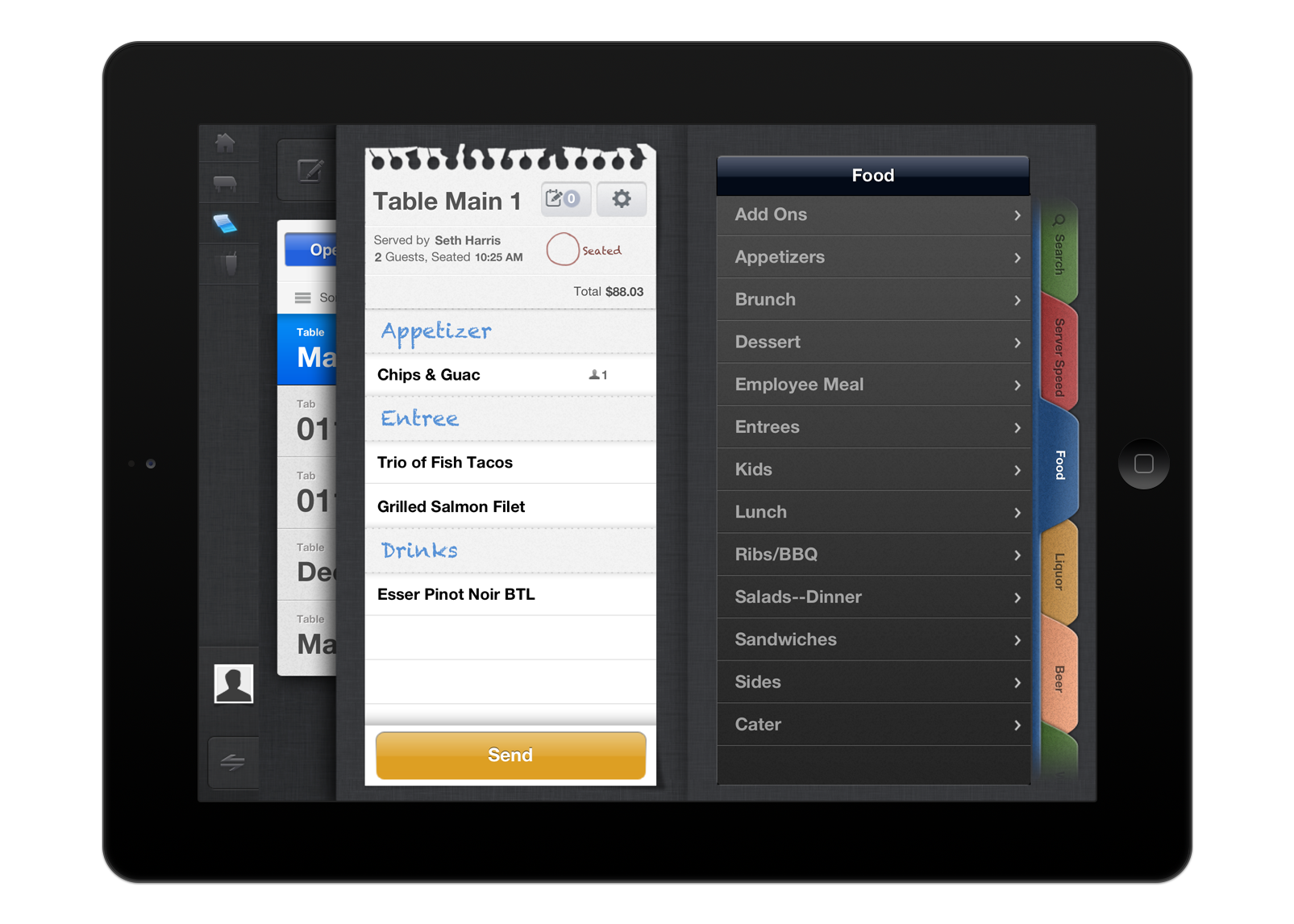 Lavu, which develops and sells the POS software, partners with heavy hitters such as Heartland Payment Systems to provide restaurants with its solution.  In addition to real-time menu changes, it also offers BOH reports on sales, time sheets, and transaction tracking.

Breadcrumb became commercially available in March 2012; in May, Groupon acquired the company, officially announcing the solution in October.

When developing Breadcrumb, Seth Harris, a restaurant industry vendor, looked to offer an option to legacy systems that he saw as too cumbersome, creating software “that was more intuitive, easier to set up, and affordable,” he says.

Breadcrumb allows restaurateurs to instantly update and edit menus, change dining room seating, or configure a split check, all from the iPad. Wait staff are able to use the iPad to take orders tableside and route the orders to different kitchen stations. When checking a price, staff can search by menu name or ingredient. Breadcrumb lets a restaurateur’s operations talk to each other, sharing data on menu items or labor management.

Also, because Breadcrumb is a cloud, hosted solution, users have access to the information from any mobile device.

There are no upfront licensing fees; subscriptions begin at $99 for one iPad and go up to $499 for an unlimited number of users. Full support is included, Harris notes. “I wanted to make sure if there was a problem, the operator could have immediate support—you don’t know what it’s like to be offline on a Saturday night unless you’ve been in the restaurant business,” he says.

Restaurateur Adam Elzer made the switch to Breadcrumb when he opened a second locale, Empellion Cocina, earlier this year. Sister restaurant Empellion Taqueria is still using a legacy system, but plans are underway to move that site to Breadcrumb as well. The downtown New York City eateries focus on Mexican fare—Taqueria is more of a taco joint, while Cocina serves a more upscale menu.

The biggest problem with the older system, says Elzer, was that when staff needed to update the system because of a POS issue, the entire system would shut down to refresh itself.

Elzer is finding additional benefits. “Breadcrumb gives us extra front of the house functionality,” says Elzer. “ We can access the system online anywhere. Before, I could only access the data from my computer in the basement; now I can use any computer.”

Adds Elzer, “Another cool function is I can load Breadcrumb onto my own personal iPad, and look at the same screen as the server without having to be there in the restaurant. “

For Groupon, the acquisition is a good strategic move, extending its reach further into the business arena of restaurants. While Breadcrumb and Groupon payment are tied together, restaurants using Breadcrumb do not face any pressure to run a Groupon Daily Deal, asserts Harris.

Harris understands that restaurateurs are looking for more out of their POS systems than menu options.  Additional capabilities are on the horizon, including integration with business intelligence and analytic systems and inventory management and accounting programs.

In September, Micros released a version of its Simphony program for the iPad; earlier this month, the company announced a version of both Simphony and Opera that supports the newly released iPad Mini. The cloud-based POS system is for use by small, single unit operators or larger enterprise operations.

“It’s all about the software,” says Mike L Russo, chief technology officer. “Simphony can be used on the iPad, but it can also run on an IBM system, which is how Starbucks uses it.”

Already in production at more than 10,000 worldwide sites, Simphony offers complete enterprise management, says Russo. If you’re operating a chain of 500 or 1,000 stores, you need that power behind you.

“Full service restaurants need more than just POS functionality, requiring the back office and enterprise functionality that we have in our system,” says Russo.

In addition to POS capabilities, Simphony delivers an e-commerce solution, integration with digital signage, coupon and loyalty programs, workforce management, and integrated inventory and enterprise reporting. The reporting functions collect data from each workstation at every locale.

“You can see what is happening throughout the entire enterprise,” says Russo.

Changes in menu items, pricing, promotions and product descriptions are reflected in real-time on workstations, menu boards, websites, kiosks, and mobile ordering systems across the enterprise.

“Our whole strategy is to provide a single platform that can feed a digital menu board, a smart board, a POS terminal or a wine list for the consumer,” says Russo.

Micros’ customers can run the Simphony platform on existing hardware and smart phones, as well as the iPad. “ We didn’t want to do a standalone iPad system; we want to stay current and open with our customers' demands.”