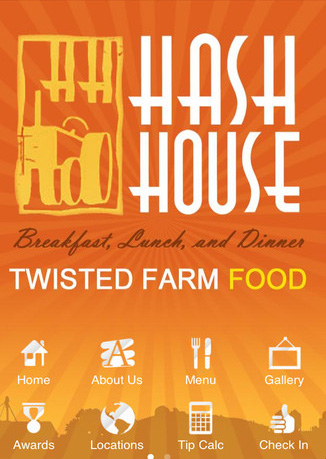 Developed by IT Mentor Apps for the iPhone and Android, and available for download from iTunes and Android Market, the app features an interactive portal that lets diners share photos of the food while at the restaurant.

Hash House A Go Go, specializes in “a different type of farm food; we make farm food fun,” says Brannon Rees, marketing director. “Our founding chef was raised on a farm in Indiana—our menu items are named for farm towns in in Indiana.”

Adds Rees, “We are famous for our outrageous portions and over-the-top presentations, and wanted to leverage our reputation on social media sites. Our diners love posting photos of their meals, and go as far as taking pictures of other tables food, just because it looks so good. We are hoping that our app will encourage Hash House A Go Go enthusiasts to be even more interactive and literally ‘play with their food.’”

The chain has several locations in the Las Vegas area and one restaurant in San Diego, where the concept launched. New venues recently opened in Chicago and within the Mogehan Sun casino in Connecticut--its first location on the east coast.

The smartphone app is part of the restaurant’s marketing strategy to become more engaged with mobile and social media, especially as the concept looks to expand further into the east coast. It's yet another way to connect with customers, especially social media fans.

“We have a real captured audience, with over 20,000 members in our email club, 15,000 fans on Facebook and 10,000 followers on Twitter,” says Rees.  “If customers are on Facebook and Twitter, chances are they love apps. While the majority of those using social media are younger, it is not necessarily restricted to younger people. From what we can see, those using Facebook and our app—it is really broad, like our customer base.”

Features include menus, a photo gallery, tip calculator, social media buttons with links to Facebook and Twitter, locations and “What the Critics are Saying.” A check-in button rewards guests with a special offer, like a free dessert, after three check-ins.

Guests that sign up for the brand’s newsletter, via the smartphone app or through Facebook, are rewarded with special promotions sent to their phone. Rees also has the option of doing push notifications, such as “Hash House is having a special dinner tonight,” or “Come in and get a free dessert,” a handy tool if there is a slow night.

As of January, there were 1,500 downloads; 400 of those were from people not in the restaurant, that found the app on their own, Rees notes. Customers are notified of its avaialblity via Facebook, posters in the restaurant and table tents printed with a QR code that links to the app for download.

Currently, there are no metrics on how much the app is contributing to the restaurant’s bottom line, but as Rees starts doing push alerts on specials, he will be able to see how much traffic is generated. “That’s when we can start to track it,” he says.

The app, says Rees, “is another way to keep in contact with our customer. If it makes them happy, then we are happy.”