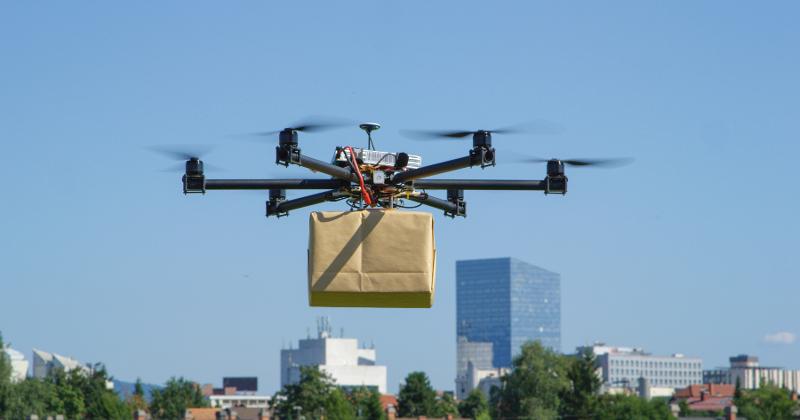 The former said it will use drones from Tel Aviv-based Flytrex to deliver food to customers' homes in Southern California this summer, becoming the first national restaurant chain to do so. The pilot doubles as a promotional opportunity (it will initially target rewards members and is accompanied by free regular delivery for a limited time), but the chain appears to be taking a serious look at the service.

El Pollo Loco believes drones could reduce its delivery costs by up to 30%, a representative told RB. Combine that with the fact that drone companies promise faster service than traditional vehicles and you have an intriguing proposition for restaurants that have long complained about the high price of delivery.

Walmart, which has also used Flytrex for deliveries, on Friday said it had invested in drone company DroneUp in hopes of expanding the service, according to RB sister company Winsight Grocery Business.

That said, drone delivery is still highly limited by federal rules. Flytrex in May got special approval from the FAA to deliver directly to people's homes, for instance, but it is still seeking permission to fly drones beyond the line of sight of the pilot.

One last data point to chew on: Drones are the fastest-growing segment in the transportation sector, with 1.7 million drones registered and more than 200,000 FAA-certified pilots as of December, according to the FAA.

C3 expands again, this time through Chowly. The fast-growing ghost kitchen company has partnered with the order integration provider to offer its 40 concepts as virtual brands to restaurants that use Chowly. Chowly helps restaurants streamline delivery by combining orders from multiple platforms directly into the POS. More than 10,000 restaurants use it, and they will now have easy access to C3 brands like Umami Burger and Crispy Rice that they can choose to produce out of their kitchens.

Chowly CEO Sterling Douglass said C3 stands out in the increasingly crowded virtual brand world: "We work with so many virtual restaurants on our platform and we’ve seen every attempt at it over the years. C3 has shown unique upside and we’re excited to share this with our large network of restaurants," he said in a statement.

Seattle is cracking down on third-party delivery companies. The City Council last week passed a new law that requires services like DoorDash and Uber Eats to get permission from a restaurant before adding it to their marketplaces. So-called nonpartner listings have become a common practice among delivery providers, but can be a nuisance for restaurants that sometimes don't even know they're listed. California has also banned the tactic, and Illinois and Nevada are considering similar measures.

Arthur Treacher's is teaming up with Franklin Junction. The once-popular fish and chips chain that was recently revived as a virtual brand has a deal to expand through Franklin Junction's network of host kitchens—existing restaurants that want to bring delivery-only concepts into their kitchens. Treacher's will open its first such location in Baltimore this month and plans to add 100 by the end of 2021.

Treacher's 2.0 is an offshoot of Nathan's Famous, which also works with Franklin Junction and has been growing aggressively via virtual brands.

Uber Eats distributed $4.5 million in microgrants. The funds went to 900 U.S. restaurants, more than 87% of which are owned by women or minorities. Each restaurant received $5,000.

The grants are part of the delivery company's $20 million Eat Local Support Effort. You can see the full list of grant recipients on Uber Eats' website.

Popmenu wants to upgrade restaurants' "most underutilized asset": the menu.