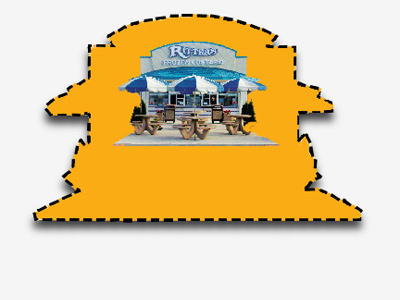 There are lots of reasons to make restaurant footprints smaller these days: reducing building or operating costs; taking advantage of in-line locations or smaller markets; entering nontraditional venues—airports or universities, that kind of thing—or providing alternatives for operators who want to open multiple units in a single trade area.

Whatever the reasons, the strategy is about maximizing return on investment, especially for the franchisee, and ultimately being able to grow the system.

The economy over the last few years has provided the ultimate incentive for operators that have had the foresight and the resources to put a new generation of prototypes in the pipeline. These new prototypes also serve as the standard bearer for the ambitious remodeling programs that are now being undertaken by a variety of chains.

And while some of these prototypes may offer different services, such as windows for call-ahead pickup, they’re also designed to preserve as much of the "brand DNA" as possible, including the menu. Converting more dine-in business to takeout allows seating space to be reduced (in some cases, the new prototype may even take the form of a small kiosk, utilizing a common seating area). Meanwhile, back-of-the-house layouts are configured to work more efficiently with the same amount of equipment and features, a process referred to as "value engineering."

"We looked at every possible area," says president and CEO John Longstreet. "We wanted to save capital costs as well as development costs and operating costs."

"We probably had 50 or 60 stakeholders weighing in during the evaluation process, from general managers to dishwashers and bartenders," adds Mike Stack, chairman of the board, who spearheaded the project.

A conversion based on the new prototype that opened last year is running at over $4 million in sales on an annualized basis.

McAlister’s Deli
The reality of the real-estate markets where McAlister’s Deli wants to drive its future growth was the impetus behind a new prototype launched two years ago by the Ridgeland, Mississippi-based quick-casual deli chain.

"Strategically, McAlister’s works well in small cities and bigger towns like Hattiesburg and Oxford, Mississippi, and there’s a lot of potential markets like that in our Southern stronghold," says Frank Paci, president and CEO, who joined the 295-unit company in September 2010. "Let’s face it, how much real estate do you really need in towns like that, especially when a bigger building needs a bigger break-even?"

Like many of its competitors, McAlister’s is actively seeking space in such nontraditional locations as airports and universities, a strategy that got a big boost when the company signed deals last year with Air Host and Sodexo. All told, it made sense for the company to grow bigger by going smaller.

"Giving our customers easier access for takeout means that the operator can still do more volume without a larger investment," notes Paci. "And it reduces the risk that the facility will be maxed out at the busiest time, because some of the dine-in business is being converted to takeout." On the downside, this does make for an added premium on end-cap locations, as well as freestanding ones that are oriented to support a pick-up window.

Now even the larger units, like the ones that continue to be developed in higher-volume markets in Florida, are adding takeout windows to make takeout more convenient.

Yet a third iteration of the growth strategy is McAlister’s Select, smaller 650- to 1,500-sq. ft. units being developed in nontraditional locations where the venue is sharing such assets as seating and back dock. The highest volume of these, in locations like Illinois State University and Cleveland Airport, are capable of serving virtually the entire 100-item menu.

Ritter's
Talk about a small footprint: the new "scoop shops" being developed by Ritter’s Frozen Custard are as petite as 200 sq. ft., virtual satellites meant to merchandise frozen treats that are actually produced onsite from full-size units in the same general market.

"When you have an equipment package that costs as much as $150,000, you want to make sure you get full use out of it," says Gary Occhiogrosso, chief development officer for Ritter’s, part of New York City-based TRUFOODS, LLC, which is also parent to the Wall Street Deli, Pudgie's Famous Chicken and Arthur Treacher's Fish & Chips franchises.

In fact, one of the most important features of the Ritter’s concept is the fact that its signature frozen custard and other products, including a new probiotic frozen yogurt, are made fresh on-premise. The barrel custard machine, which costs $30,000-$35,000, is the single most expensive piece of equipment in the shop.

Developing a much smaller kiosk that could be supplied via a freezer-equipped truck from a full-production unit made complete sense, not only from the point of view of return-on-investment but also the kind of locations that Ritter’s can go into, from airports to sports arenas.

The scoop shops—the name is so far for internal use only but the company is considering using it more formally—can also be deployed in co-branding situations with its sister brands, as well as in other concepts that its franchisees may operate.

"We’ve already proved that transporting our products is adaptable to carts and mobile trucks, so the scoop shops are the next logical step," explains Occhiogrosso, adding that what is saved on equipment at a single scoop shop is offset by the expense of transportation, but that leasehold improvements are far less than what they would be for a full-size in-line or freestanding unit.

It’s when a franchisee builds out an existing market with a variety of smaller satellites clustered around a full-size production location that the economics really pay out. And of course even the smallest kiosk in a high-traffic location—such as the 700-sq.-ft. unit at Atlanta’s Hartfield-Jackson airport—has the potential to generate huge sales volumes and return on investment.

"From the customer’s perspective, the experience at a scoop shop is the same," says Occhiogrosso. "Same products, same quality, same service standards. They may even see the same counter, dipping equipment, smoothie machines and so on. It’s in the back of the house where everything changes: no custard machines, no storage for ingredients, and only enough freezer and refrigerated space as what’s needed for a day’s operations."

Fazoli's
When Fazoli’s opened the first of a new collection of smaller prototypes in January 2010 in suburban St. Louis and Dayton, Ohio, it was the first new development for the Lexington, Kentucky-based chain in more than three years. The move was designed to entice franchisees to begin building again with lower construction and operating costs, and to take advantage of in-line locations for the first time. Now the standard prototype will average 1,800 to 2,300 sq. ft., versus 2,900 to 3,400 with the old model (which was first introduced more than 15 years ago).

The new prototype is the latest phase in an ambitious "extreme makeover" program, launched in 2009 with a complete overhaul of the fast-casual Italian menu, service upgrades and other operational refinements. In addition, there are plans to revamp the majority of Fazoli’s existing units to an all-new, contemporary design that uses more vibrant colors and bold, fun photos and graphics to create a more high-energy, family-friendly dining environment.

The latest wrinkle is the first of several planned locations within Walmart stores, which opened in early March and is an adaptation of the 2,000-sq.-ft. inline prototype first introduced last year. Replacing the old 2,900 to 3,400-sq.-ft. freestanding units, the new prototype costs less than half-a-million dollars to build and features as few as half the number of seats, plus a curbside carryout that makes up for the loss of seats and helps to contribute to average unit volumes of $1.2 million or more. This compares favorably with average sales in the larger units, while offering a better ROI for franchisees.

The Fazoli’s team is also excited about the prospects for two as-yet-to-be-built prototypes that are even smaller still. A 1,000-sq.-ft. model, intended for colleges, will serve about 75 percent of the menu and provide about 40 seats. "We’ll reduce the menu by a few salads and sandwiches, as well as a few of the less popular pasta items, but we’ll retain the basic product mix," explains Carl Howard, president and CEO of the 220-plus unit company.

And a 600-sq.ft. space, basically a kiosk, is designed for airports and other nontraditional locations where a small selection comprising pizza, two pastas and a few of the most popular salads and sandwiches—which can be sold via grab-and-go coolers—can be integrated into food courts and mixed-use venues where there is common seating. Although all of the prototypes have started in business as company-owned units, they’ll be available to franchisees once any bugs are knocked out.